•  Miller-initiated Policy Was a Bridge Too Far for Nielsen
•  Assange Arrested; Trump "Forgets" What Wikileaks Is
•  Cain Is Dead in the Water
•  McConnell Pushes Back against Cuccinelli
•  Even if Trump Loses, He Wins?
•  Former Obama Counsel Indicted
•  Democratic Presidential Candidate of the Week: Mike Gravel


Miller-initiated Policy Was a Bridge Too Far for Nielsen

Since former DHS Secretary Kirstjen Nielsen was compelled to resign on Sunday, certain pieces of the puzzle have been made clear. Border apprehensions are way up, Donald Trump is unhappy about it, and this has created an opening for the ultra-nativist Stephen Miller to exert his influence. On Thursday, what is probably the biggest missing piece of the puzzle fell into place. The policy that Miller wanted to implement, which the DHS would not do because they deemed it to be illegal, was to take the undocumented immigrant detainees for whom there is no jail space, put them on buses, and dump them in "sanctuary cities" in order to punish those cities for their failure to support the administration.

Surely it is no surprise that Trump loved the idea. And if there's any policy that embodies the worst instincts of his administration, this has to be it. In one package, we have disregard for the rule of law, abuse of power, dehumanizing treatment of immigrants, and the view that any Americans who oppose Trump are the enemy. In case there was any question on the latter point, DHS officials confirmed off the record that Miller and Trump specifically wanted to make sure that some buses were routed to the home district of Speaker Nancy Pelosi (D-CA). After this news broke on Thursday, Pelosi spokeswoman Ashley Etienne blasted the administration: "The extent of this administration's cynicism and cruelty cannot be overstated. Using human beings—including little children—as pawns in their warped game to perpetuate fear and demonize immigrants is despicable."

One wonders how much longer Stephen Miller can maintain his place of honor in the White House. It's clear that he is very good at playing to Trump's baser tendencies. However, he has not only gotten zero results, but the administration is publicly flailing around on the issue where Miller is supposed to be "advising." Further, he's generating a lot of bad PR, and even some pushback from the GOP (see below). In TrumpWorld, that combo is usually a prelude to being shown the door, bootlicking or no. (Z)

Late Wednesday night/early Thursday morning, Wikileaks' founder Julian Assange's time on the lam came to an end, as he was arrested in London. The Ecuadorean government, which hosted him for seven years in its embassy, grew weary of his shenanigans and withdrew the asylum it was providing. So, in went the bobbies, and out went Assange.

Assange, of course, is a connector between Russia and the Trump campaign. Since we don't have the Mueller report, we don't know exactly how much the Special Counsel uncovered on this front, but surely it is not the whole story. It's not likely that the Dept. of Justice will pick up the ball with AG William Barr in charge, but it's dollars to doughnuts that one or more House committees are going to want to hear from him. Assange is going to be in British custody for quite a while, but a visit to the United States can surely be worked out with them.

Most Republicans are expressing much satisfaction that Assange will be held accountable for his crimes. Whether they really believe that, given how much harm he did to Hillary Clinton and the DNC, is another matter, but that's what they're saying. One Republican who did not express satisfaction, however, is Donald Trump, who surely knows that the sudden availability of such an important material witness is not good news for him. So, when asked about the arrest on Thursday, the President said he has no idea what Wikileaks is. That's what is known as a "baldfaced lie," since Trump regularly praised the site on the campaign trail, and "We love Wikileaks" was one of the main applause lines at his rallies. Other prominent members of the GOP, including Senate Intelligence Committee Chairman Richard Burr (R-NC), Sen. Lindsey "Chameleon" Graham (R-SC), and Sen. Roy Blunt (R-MO) pretty much threw the President under the bus, telling reporters that they were mystified by his past support for Wikileaks and his current "ignorance" of the site. More trouble in GOP paradise? (Z)

Cain Is Dead in the Water

Herman Cain was a woefully unqualified choice for the Federal Reserve's Board of Governors, with the result that quite a few GOP senators gently suggested that the nomination should be pulled. Donald Trump did not take the hint, so on Thursday four Republican senators removed all ambiguity and announced that Cain does not have their vote: Kevin Cramer (ND), Cory Gardner (CO), Lisa Murkowski (AK), and Mitt Romney (UT). That's enough to kill the nomination, unless at least one Democrat or Independent was to break ranks, and there was no indication that any of them planned to do so. In fact, it was much more likely that the list of GOP 'nay' votes was going to grow, with Johnny Isakson (GA), Susan Collins (ME), and Rand Paul (KY) among the likeliest additional 'nays.'

The nomination is unsalvageable, then, and moving forward would just waste everyone's time while setting Team Trump up for an even bigger black eye. Late Thursday, ABC News reported that Cain is going to withdraw his name from consideration shortly, perhaps as soon as today. Whether this was at Cain's initiative, the President's, or both, is unknown, but either way it's back to square one for Trump. (Z)

McConnell Pushes Back against Cuccinelli

Herman Cain isn't the only less-than-stellar candidate for high office to be getting pushback from Senate Republicans right now. Majority Leader Mitch McConnell (R-KY), who is getting an earful from the members of his caucus, publicly warned Donald Trump not to pick former Virginia Attorney General Ken Cuccinelli to be Kirstjen Nielsen's replacement as DHS secretary.

Part of the problem is that DHS is acquiring something of a reputation as a bureau that is less focused on national security, and more focused on serving as the Trump administration's Blackshirts. The other problem is that Cuccinelli has a reputation for being a bit fanatical in his anti-immigrant politics, and for being willing to play fast and loose with the Constitution. He wants to revoke birthright citizenship, for example, and is an advocate of denying unemployment benefits to people fired because they cannot speak English. Add it all up, and McConnell & Co. see nothing but headaches from a hypothetical Secretary Cuccinelli: PR nightmares at best, and lawsuits and potential criminal charges at worst.

The base, by contrast, is salivating at the prospect of getting an ultra-hardliner installed at DHS, and has been lobbying Trump six ways to Sunday. He's very susceptible to that kind of pressure, so he might go through with the nomination anyhow, setting up a potential showdown with Senate Republicans. With the Cain situation (see above), and the Wikileaks situation (see above again), and the Yemen resolution, and the national emergency override, it's just more evidence that the Trump Republicans and the more traditional Republicans are starting to diverge as the 2020 election draws closer. Maybe they sense a sinking ship, and are starting to think that it's "every man for himself" time. (Z)

Even if Trump Loses, He Wins?

It's not just Congressional Republicans who might be contemplating a world in which Trump loses the 2020 presidential election. Some of the President's biggest fans are apparently contemplating it, too. Specifically, Fox News host Tucker Carlson, who is VP of the Trump Fan Club (and runs the meetings when President Sean Hannity can't be present), has been using his show this week to float the idea that maybe the President is trying to lose the 2020 election so that he's not cooped up in the White House throughout his 70s.

In short, then, if Trump wins it's because he wanted to win, and if he loses, it's because he wanted to lose. That's a fairly neat arrangement, and certainly does nothing to undermine the folks who claim the President's supporters are more like a cult. In any event, it's primarily of interest because it's about as clear an indication that Carlson will ever give that he thinks there's a real possibility that Trump loses this thing. (Z)

Greg Craig served as White House counsel for both Barack Obama and Bill Clinton, most notably directing the latter's impeachment defense. Now, Craig is going to have to mount a defense for himself, as he has been indicted for violating the Foreign Agents Registration Act by not disclosing his work for Ukraine and then lying to the Department of Justice about it. This is the same thing that got former Trump campaign chair Paul Manafort into trouble, and indeed, it was Manafort who made the first introductions between Ukraine and Craig's firm, and it was special counsel Robert Mueller who set the Dept. of Justice on Craig's tracks.

Given that Obama and Clinton are both out of office, this story is primarily of interest because it's going to become the basis for a lot of whataboutism. As in, "Yeah, some of Donald Trump's people got indicted, but so did some of Barack Obama's, so there." Some might say that one guy, charged with a handful of relatively low-level crimes, is substantively different than a whole bunch of guys charged with a gaggle of crimes, but whataboutism rarely has room for the degree of the behavior. (Z)

We thought that we'd gotten to everyone who might plausibly declare a presidential run this year, but then Mike Gravel surprised everyone, as he is wont to do. Since he has no intention of winning, and only wants to get on the debate stage, the pros and cons below will be the pros and cons of giving him a debate slot, and not his pros and cons as a hypothetical Democratic nominee. 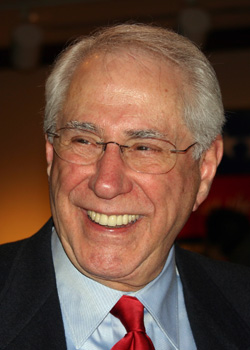