With Vice President Mike Pence running the show, Republican and Democratic leaders met on Saturday to discuss the federal government shutdown. After the meeting, some participants said there had been no progress, while others said "baby steps" had been made. Either way, they are not much closer to ending the shutdown.

The only thing that definitely is happening is that both sides are digging their heels in, and leaving themselves little wiggle room for dealmaking. Donald Trump, for his part, threatened once again to declare a national emergency and to simply ignore Congress. Beyond the fact that doing so would be a very risky move, as we discussed yesterday, it also wouldn't do much to alleviate the current situation, as it would trigger an immediate legal challenge that the federal government would be unable to answer right now...because the Dept. of Justice is currently closed.

Trump also took to Twitter throughout the day, of course, to take potshots at the Democrats and to insist that the wall is definitely going to be built. His final missive of the day was this:


One wonders if he knows that is the "Game of Thrones" font, and if so, if he realizes what kinds of strange and maladjusted characters he is encouraging people to compare him to. Say, for example, Tyrion Lannister, a very wealthy fellow with very small hands who desperately wants to be accepted by the other wealthy and powerful folks in New York...er, Westeros, but has little success in that endeavor. Or Davos Seaworth, who neglects his sons, cheats on his wife, can barely read, and made his fortune laundering foreign money...er, smuggling. In any case, whether Trump gets the reference or not, he's certainly inviting the Internet's meme-makers to take their best shots, which they have done:

We the #UnitedStates approve this message. This is how we #MAGA#IndictTheMF @realDonaldTrump#ForThePeople #Respect #Resist #NeverAgain #NeverForget #Democracy #Fascism #OnwardTogether #YesWeCan #MuellerInvestigation #MeToo pic.twitter.com/KBeLUwR2pc


The President also, for some reason, wants to stop using the word "shutdown" and start using the word "strike" to describe what's going on. It is entirely unclear why he thinks this makes sense, or why he believes it's better for him. For it to be a strike, federal employees would have to be actively refusing to report to work. Nobody on either side of this debate thinks that is what is going on, and to use verbiage that implies otherwise would seem only to increase these folks' anger towards Trump. He thinks that most of the employees who are going without paychecks right now are Democrats, and he may even be right about that, but at least some of them are Trump voters. Or, at least, they were Trump voters.

Speaker Nancy Pelosi (D-CA), for her part, has dug her heels in, too. In the past two days, she's publicly declared all of the following:

"A wall is an immorality. It's not who we are as a nation."

"The wall, in my view, is an immorality, it is, again, a waste of money, an opportunity cost to protect the American people. But it is a diversionary tactic on the part of the president."

She's definitely got her talking points down, though there are quite a few arguments she could be making, but is not (see below). In any event, between Trump's tweet and Pelosi's declarations, at least one of them is going to end up being very incorrect.

In view of the thus-far-unsuccessful negotiations, Pelosi & Co. have already prepared their next move. When the House reconvenes on Monday, they plan to start passing piecemeal legislation that would reopen the government bit-by-bit, starting with the Justice Dept. and the IRS. This will put Trump and Senate Majority Leader Mitch McConnell (R-KY) into an even tougher bind, because the Democrats will say, "Why do we need to keep Justice closed while we work this out?" It's a good question, and if Trump and the GOP refuse to reopen even the most critical parts of the government, it will look petulant and reckless, and will be very bad optics for them. Of course, if they give in and agree to re-open Justice and the IRS, then they have not only shown weakness, but they have also set the Democrats up to use the same tactic again. "Why do aspiring homeowners have to put their dreams on hold while we work this out?" "Why do people need to go without food stamps while we work this out?" "Why do the national parks need to deteriorate into trash dumps while we work this out?"

In the end, the Democrats remain in the stronger position here, and they know it. In part, because they are unified, unlike the Republicans. Already, Sen. Cory Gardner (R-CO) has publicly broken with the President, as have a handful of GOP members of the House. A few of Gardner's colleagues in the Senate haven't quite gone so far as he has, but have grumbled openly about the situation. That includes Sen. Susan Collins (R-ME), who will be on the morning news shows today to share her views. Meanwhile, nary a Democrat has come out in favor of the wall, not even blue dogs like Rep. Dan Lipinski (D-IL) or Sen. Joe Manchin (D-WV).

In addition, polling continues to break in the Democrats' favor. In the latest Gallup poll, in fact, Pelosi has a favorable rating of 38% and an unfavorable rating of 48%. That's a net of -10, which seems pretty bad, but it's actually a considerable improvement for her over the last month. It also means that for the first time in his presidency, she is more popular than Donald Trump, who is currently 18 points underwater (40-58).

Today, there are more meetings scheduled between the leaders of the two parties. Maybe they will surprise us all, but it's very hard to see how anything much is going to get accomplished right now. Meanwhile, with shutdown day number 15 underway, we are less than a week away from surpassing the longest government shutdown in U.S. history (21 days, from Dec. 16, 1995 to Jan. 5, 1996). (Z)

Senate Kicks Hundreds of Nominees Back to Trump

Although the Senate is not currently playing much of a role in the shutdown debate, they did find time to conduct a little housekeeping this week. Namely, they returned 270 of Donald Trump's nominees to him. Roughly 70 are judicial nominations, the rest are appointees to various spots in the federal bureaucracy.

Naturally, this is a bit of a setback for the President. As someone who has had enormous difficulty staffing the federal government, Trump really cannot afford to lose nominees en masse like this. While he can renominate some or all of these individuals, it will take a fair bit of effort on the part of his staff to redo all the paperwork. Further, if they didn't get confirmed already, there's probably a reason. On top of that, this development would seem to send a pretty clear message that if Trump is expecting the Senate to be a rubber stamp from here on out, he might want to think again. (Z)

One of the standard occurrences at the start of a Congressional session is that the various senators and representatives introduce pet legislation that they would like to see adopted, or—sometimes more accurately—that they would like their constituents to think they tried their best to get adopted. In that vein, this week saw the introduction of three different proposed constitutional amendments.

Two of the three proposals came from the same member, namely Rep. Steve Cohen (D-TN). He would like to see the Electoral College abolished, and to make it illegal for presidents to pardon themselves, their families, members of their administration or their campaign staffs. One wonders what might have put those two ideas into the Congressman's head. In any case, given that abolishing the Electoral College would require a sizable number of small states to vote against their own self-interest, that one is going to happen roughly 10 minutes after pigs start flying.

As to clarifying the pardon power, there's no evidence that momentum exists for such a change, nor that the necessary number of red-state legislatures would vote for it. However, it's at least possible that enough people get behind it that it becomes law, especially since it seems such a commonsense provision. It's worth noting, however, that such a rule would not have stopped Gerald Ford from pardoning Richard Nixon, since Nixon was not a member of Ford's family, nor his administration or campaign staff. So, it would also not stop President Pence from pardoning ex-president Trump, were it to come to that.

The other proposal, and the one that is getting the most attention, comes from Sen. Ted Cruz (R-TX) and Rep. Francis Rooney (R-FL), with Sens. Marco Rubio (R-FL), Mike Lee (R-UT), and David Perdue (R-GA) as co-sponsors. It's a term-limit amendment, and would restrict senators to two six-year terms and representatives to three two-year terms.

Term limits are an ill-considered idea (see below). However, they are also an idea that has support from prominent members of both parties. Although, one wonders if such support is just lip service. After all, if Cruz really thinks two terms in the Senate are enough, he could commit to retiring at the end of his current term, and yet he has refused to do so. In any case, this is the proposal among the three that is most likely to become law. That said, Cruz put the same bill forward in 2017, and it didn't go anywhere. And that was hardly the first time that a term-limit amendment has been proposed. In the end, the barriers in amending the Constitution are so great that even proposals that seem very popular and/or very sensible have only a slight chance of becoming law. That's why only one of them has been adopted in the last 40 years. (Z)

When it comes to Donald Trump's wall, most Democrats are pretty sure it's a bad idea, perhaps for symbolic reasons, or because it's a waste of money. Meanwhile, many Republicans are pretty sure it's a good idea, either for symbolic reasons, or because it will make Americans safer or else will keep American jobs in American hands. The discussion rarely goes much beyond that. Here's our attempt to be a bit more comprehensive:

This is only a brief overview. If you want to read more, the libertarian Cato Institute, the nonpartisan Migration Policy Institute, and Foreign Policy magazine all have very good and very thorough analyses, accompanied by charts and pictures and all sorts of bells and whistles. (Z)

As with the Mexican wall, term limits are an idea that gets talked about a great deal (see above), but thought about fairly little. Ostensibly, they are a corrective for corruption, and a way to keep Congress churning, introducing new perspectives and ideas on a regular basis. However, experts are nearly unanimous in their agreement that term limits are a bad idea, one that has some significant (and unexpected) potential consequences. Here are some of the main issues:

This will be our last regularly-scheduled Sunday post for a while, so we will be moving the candidate profiles to Fridays. Also, in response to a very good suggestion, we're going to add pictures of the candidates. 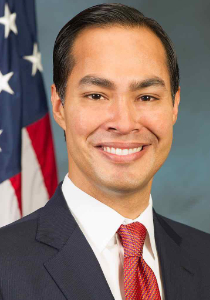