•  Our Long National Nightmare Is Over (For Three Weeks, at Least)
•  Stone Indictment Is Bad News for Team Trump
•  Invisible Primary Claims Its First Victim


Our Long National Nightmare Is Over (For Three Weeks, at Least)

On Friday, in a 180-degree change of course, Donald Trump announced that he would sign the appropriations bills passed by the Democratic-controlled House. With that promise in hand, Senate Majority Leader Mitch McConnell (R-KY) brought the bills up for a vote in the Senate, where they passed. Trump applied his signature Friday night, which means that the government will resume normal operation, and the Dept. of Homeland Security will be funded for three weeks while Republicans and Democrats try to hammer out a compromise on border security. The President warned that if something doesn't get done in three weeks, he may either shut down the government again (or, at least, DHS), or declare a national emergency.

Trump gave a speech on Friday, and also sent out a series of tweets in which he insisted that he did not back down. For example:

I wish people would read or listen to my words on the Border Wall. This was in no way a concession. It was taking care of millions of people who were getting badly hurt by the Shutdown with the understanding that in 21 days, if no deal is done, it’s off to the races!


It is hard to know what caving would look like, if not this. He played chicken with Speaker Nancy Pelosi (D-CA) over the State of the Union address and folded within just hours. Then, a day later, he reopened the government on the exact terms the Democrats demanded. From where we sit, the only way he could have surrendered more completely is if he also agreed to personally detail Pelosi's car, free of charge. Trump didn't even get an agreement to deliver the State of the Union address on the usual date; Pelosi—who is apparently calling all the shots right now—says they'll determine that once the government is reopened. Or, as an anonymous former Trump staffer put it, "I'm assuming Nancy Pelosi will be giving the State of the Union now, since she's running the country."

Of course, it is not our opinion, nor those of anonymous former staffers, that matter in this little drama. No, the key is the right-wing media's take. First, because Trump revels in their praise, and shrinks in horror at their (rare) criticism. Second, because he (rightly) perceives them as a barometer of how the base is feeling. And the response from that quarter was pretty brutal. Some examples of the commentary, headlines, and tweets:

Though they're not a right-wing outlet, the New York Daily News' cover certainly captured the general tenor of the day: 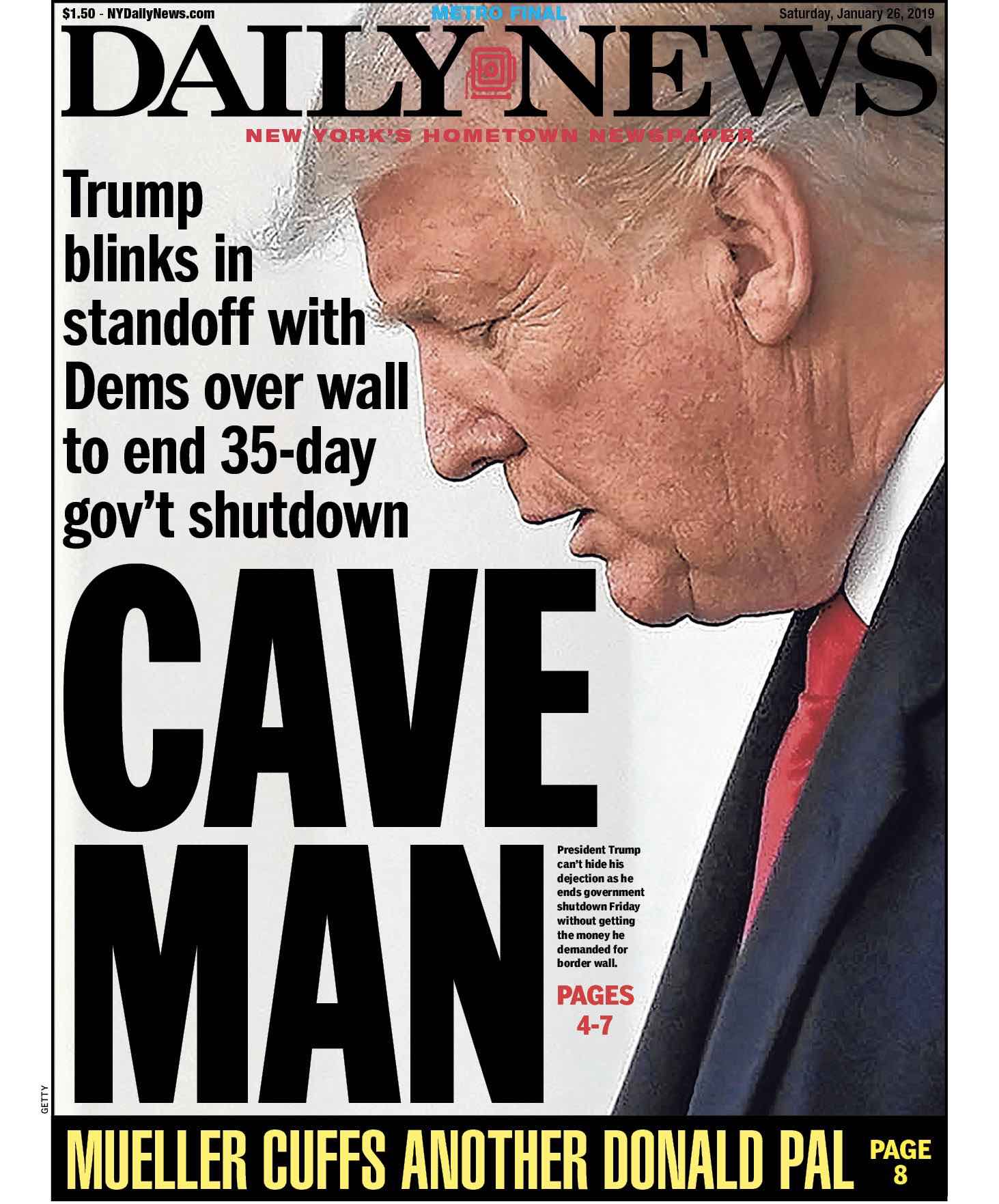 It should be noted that some of the right-wing punditry is closing ranks around Trump. For example, Bill O'Reilly tweeted: "Political chess game continues. President Trump reopens government—a good thing. Gives Dems three weeks to make a border security deal. Reasonable. Advantage Trump today." Clearly, Bill's no longer in the "no spin zone." Then there is Laura Ingraham, who weighed in with this: "Trump's re-opening the gov't fostered such goodwill!" Still, Trump hasn't been lambasted by so many of his ostensible supporters since...well, maybe ever. Though the day he ordered airstrikes against Syria probably came close. In any case, it's probably a good thing he signed the bills before his Saturday-morning review of the media coverage of his administration, because he might have changed his mind (as happened back in December).

The first big question that this turn of events raises is: Why now? How did Trump go so quickly from sticking to his guns to capitulating? Some possibilities:

Only the President knows for sure, but it could be any of these.

The second, and more important, question that this turn of events raises is: What next? Here are the four basic possibilities, as we see them, listed from most to least likely:

Anyhow, as with the Roger Stone story (see below), this matter presumably enters into a holding pattern for at least a short while. (Z)

Republican dirty tricks guru and Donald Trump intimate Roger Stone was arrested in an FBI raid early Friday morning, not too many hours after a grand jury indicted him on seven felony counts. There was every chance that the story would be fleshed out much more during the day on Friday, and indeed it was.

Now that the indictments have been made public (they were kept secret until Stone had been arrested), certain secondary questions have been answered. For example, one of the felony charges is witness tampering, and the witness in question is radio host Randy Credico, whom Stone tried to stop from talking to Congress. However, the key part of the indictment, and the portion that everyone is talking about, is this, which addresses Stone's interactions with Wikileaks (a.k.a. "Organization 1"):

This implicates not one, but two members of the Trump campaign: The person who contacted Stone, and the person who directed the senior official to contact Stone. Since special counsel Robert Mueller's indictment goes to great pains to avoid providing any identifying information about the person who gave the order, it was presumably someone who was very high up in the campaign (and thus could give that kind of order), and someone who has not yet been indicted (so, no Paul Manafort). The obvious candidates are the members of the Trump family, with the President himself as candidate #1 (or, probably more accurately, individual #1). Meanwhile, CNBC is reporting that the person who received the order, and thus served as the intermediary between Stone and the campaign, was Steve Bannon. If CNBC is correct, that would add additional credence to the notion that Trump himself gave the order, since very few other people, if any, were in a position to tell Bannon what to do.

So, the central charge of the indictment is very bad for Team Trump. The timeline that is coming into focus is none too good, either. By the time Stone was contacted about Wikileaks, it was already publicly known that the Russians had hacked the DNC and given the information to Wikileaker Julian Assange. Thereafter, not only did the Trump campaign ask Stone to talk to Wikileaks on its behalf, but Trump himself called on Wikileaks to hack Hillary Clinton (July 27), and raised questions about Hillary Clinton's health after a currently unknown person who was in touch with both Assange and Stone suggested that Trump do so (August 15), and then mentioned Wikileaks more than 160 times in the span of a month (October 10 to November 8). In short, we don't know everything that Mueller knows, but there is—at very least—overwhelming evidence that Stone not only contacted Wikileaks on the campaign's behalf, but that he established a line of communication between the two entities that reached all the way to Trump himself. If true, that would make Trump guilty, at the very least, of both violating campaign finance laws, and conspiring to violate campaign finance laws. Depending on how clear the chain from Russia to Assange to Stone to the Trump campaign is, it could also be part of a grand conspiracy with the Russians.

Stone, for his part, is in deep doo-doo. It is clear that Mueller does not trust him, given the secrecy surrounding both the indictments and the early-morning raid. Stone made bail Friday, but it's likely that by the time he got home, sizable quantities of evidence (including his computer) had been seized. He's also drawn the same federal judge, Amy Berman Jackson, that Paul Manafort did. Jackson did not hesitate to toss Manafort in the hoosegow, and she surely won't hesitate with Stone, either, if she thinks it's called for. His arraignment is Tuesday.

Stone, of course, is deeply exposed here. He lied to Congress about his interactions with Wikileaks, and Mueller has proof, some of it contained within the indictment. Stone announced late Friday that he will not testify against the President, suggesting he's willing to go the G. Gordon Liddy route and take his secrets to prison with him. That would be consistent with the Nixonian pose that Stone struck for reporters on Friday: 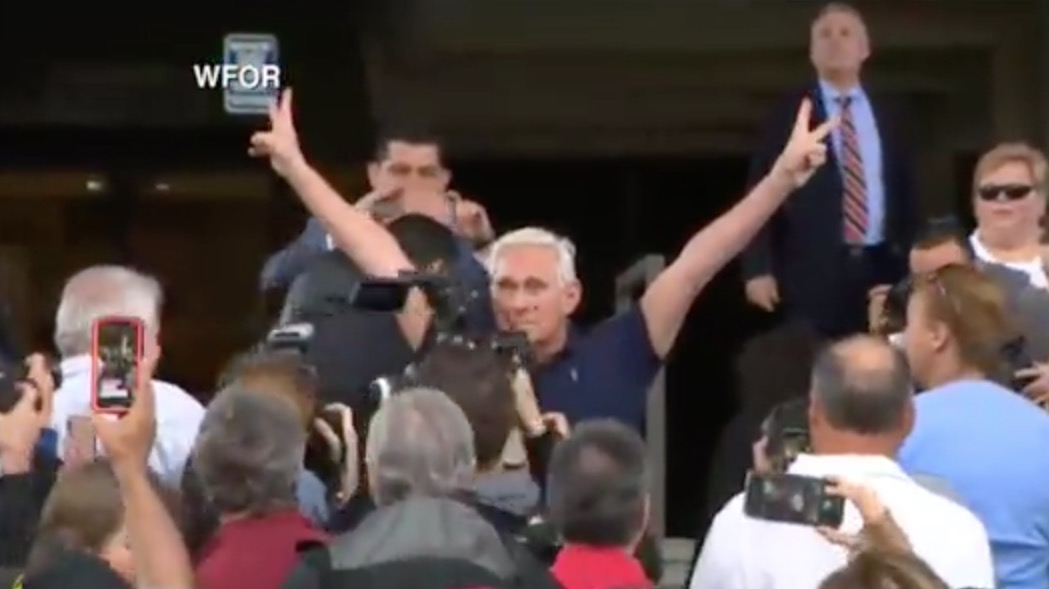 Stone is a well-known Nixon fanatic; he even has a tattoo of Tricky Dick's face on his back. He's also a fan of Frankie Pentangeli, the Godfather, Part II character who chose suicide over betraying Don Michael Corleone before Congress. In fact, as the Mueller indictment explains, Stone tried to evoke Pentangeli in his (unsuccessful) efforts to pressure Credico not to testify before Congress. All of this is to say that maybe Stone really will keep his lips zipped, regardless of the consequences. However, we cannot know exactly how serious he is until prison ceases to be an abstraction, and he's actually staring at years or decades in the clink. Further, it's possible that Mueller doesn't actually need him to sing like a canary, and already has all the evidence he needs. We will presumably know more on Tuesday. (Z)

There have been a few candidates that were rumored to be running for the Democratic nomination in 2020, or who hinted they were interested, but then took themselves out of the running. Billionaire Tom Steyer, who is using his money on a quixotic quest to get Donald Trump impeached pronto, is the most obvious example. However, none of the candidates who actually declared a run, or who formed an exploratory committee, had dropped out.

Well, none of them had dropped out as of Thursday, that is. On Friday, however, well before most candidates had even declared "it's on!," former West Virginia state senator Richard Ojeda (D) declared "it's off!" As a Latino, a military veteran, a Southerner, and a populist, he checked a lot of boxes, which is what persuaded him to throw his hat in the ring. However, the odds were poor that someone on one of the lower rungs of the political ladder, and from one of the smaller states in the union (and one of the reddest), could get traction. In fact, while a fair number of presidents served as state legislators during their careers (including, of course, Barack Obama), none of them made the jump directly to the White House. Ojeda saw the light; his announcement noted that, "I don't want to see people send money to a campaign that's probably not going to get off the ground." So that's one down, forty or so to go. (Z)