•  Mueller Appears Before the House, Everyone Comes Off Badly


Mueller Appears Before the House, Everyone Comes Off Badly

There are some days that one story so dominates the headlines, it simply doesn't work well to talk about anything else. Yesterday was one of those days, so get ready for a heapin' helpin' of Robert Mueller, following his five-plus hours of testimony before the House Judiciary and House Intelligence Committees.

The Executive Summary: If you really don't want to read a bunch of stuff about "Mueller Time," the gist of what happened is communicated by these two screen caps taken of CNN and Fox News shortly after the second round of testimony concluded: 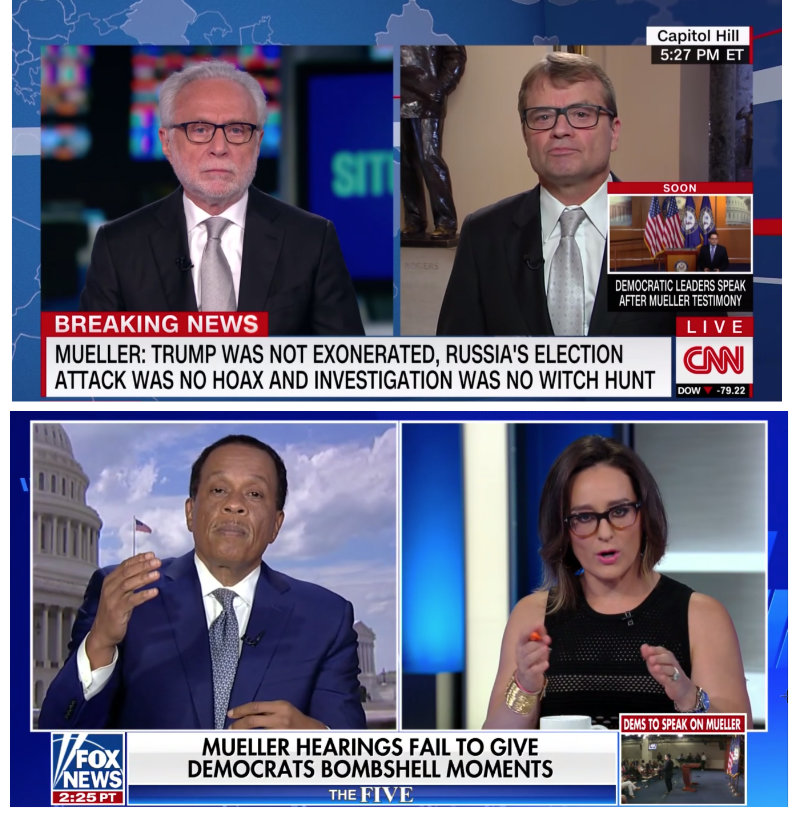 Both are entirely true. Those who are inclined to look critically at Donald Trump and the Russiagate mess got plenty of affirmation that the President's version of events is grossly distorted, and that he and his team did many problematic (and possibly illegal) things. In fact, Mueller's #1 sound bite of the whole day was his declaration that Trump might well be prosecuted once he leaves office (for the record, #2 was his opinion that Russian interference is now a permanent part of U.S. elections, and #3 was his statement that Trump's pro-Wikileaks comments were "problematic").

Meanwhile, those who back Trump and see Russiagate as a tale told by an idiot, full of sound and fury, signifying nothing, will correctly point out that we didn't really learn anything new on Wednesday, and that there was no moment that is likely to stick out and go viral. No "What did the president know and when did he know it?" or "Have you no sense of decency?"

Mueller: Everyone who knows the former special counsel, and has spoken about him publicly, has raved about how impressive he is (well, everyone outside of Donald Trump). And in one-on-one situations, or behind closed doors, Mueller surely must be so. But his performance on Wednesday was quite underwhelming.

He was, to start, very buttoned down. By one count, which is certainly in the ballpark if not right on the nose, he refused to answer questions 112 times. When he did answer, he was often curt, giving only a word or two in response. He also followed orders, and stuck to the subjects covered by his report (as he said he would do). Now, all of this is certainly defensible. However, if he really and truly believes that serious harm has been done here, there is also a valid argument to be made that the time had come for him to drop the "company man" act, and to speak forcefully and unreservedly about his concerns.

In any case, even if we grant Mueller his decision to play things close to the vest, he was still unimpressive. His hands often shook, he got confused about or forgot details, and he didn't seem to have a great sense of the material included within his report. Occasionally, he gave answers that he then had to walk back later in the hearing. Perhaps he was nervous, or maybe he's a terrible public speaker, or possibly his age (74) was showing itself, or he might not have prepped as much as he should have, or it could be all of the above. Whatever the case may be, he was certainly not a commanding presence.

The Democrats: Most members of Congress are, of course, lawyers. Yesterday we may have gained some insight into why they left that profession and went into politics instead, because the Democrats on the two committees were generally pretty terrible when it came to interrogating Mueller. Here are some of the things they did wrong:

To the blue team's credit, they were at least polite with Mueller, and most of them made a point of thanking him for his service to the country. But beyond that, Judiciary Committee Chair Jerrold Nadler (D-NY) and Intelligence Committee Chair Adam Schiff (D-CA) should apologize for how badly their caucus performed.

The Republicans: As bad as the Democrats were, the Republicans were even worse (with the occasional exception, like Rep. Will Hurd, R-TX). Their questions had all the same problems as the Democrats' questions. However, on top of that, they were doing everything possible to tear Mueller down, and to impugn him and his service to the country. That is nothing short of reprehensible.

Some of the stunts that the GOP members pulled in service of their agenda were absolutely outrageous. One of the lowest points came during Rep. Michael Turner's (R-OH) questioning:

For those who do not want to watch the video, or cannot, Turner made the argument that investigators do not "exonerate" the subjects of their investigations, so it was inappropriate for Mueller to write that he could not exonerate the President of wrongdoing. In our view, this is a silly semantic argument, but in any case, Turner badgered the living daylights out of Mueller, repeating various forms of the word "exonerate" 28 times, even though Mueller made clear he wasn't going to respond to the line of questioning (you can read the transcript here).

As part of this, and in a demonstration of some of the tackiest and most ham-fisted stagecraft Washington has ever seen (which is saying something), Turner got out a bunch of law textbooks and waved them around, asking Mueller to confirm that the word "exonerate" does not appear in any of them. These weren't just any textbooks, though; Turner went to the trouble of checking them out from the library of the law school Mueller attended (the University of Virginia). "I went to Case Western, but I thought maybe your law school teaches it differently, and we got the criminal law textbook from your law school," Turner observed smugly.

The Republicans' tactics did work, in that Mueller sometimes became flustered, or appeared to contradict himself. Although given how hard a time he was having, that wasn't such an impressive accomplishment.

Donald Trump: The President said he wasn't going to watch the testimony, and that he really didn't think the appearance was a big deal. And to prove that, he basically live-tweeted the whole thing, sending out 40 tweets in total. At the start of the hearings, it was mostly re-tweets of others' observations, so that he had plausible deniability, and could say that it was them watching, and not him. But eventually, he started to send comments under his own name. That includes the tweet everyone knew was coming, where Trump claimed total victory:

The Democrats lost so BIG today. Their Party is in shambles right now...pic.twitter.com/WDnGSOFzZU


Of course, Trump would have claimed victory even if Mueller went before Congress and said he was willing, on penalty of death, to affirm that the President colluded with the Russians, obstructed justice, laundered billions of dollars, and personally shot JFK. So, in case you didn't already know, you should take Trump's assessment with a barrel of salt.

The most interesting tweet of the day, such as it is, was this one (well, technically, these two):

It has been reported that Robert Mueller is saying that he did not apply and interview for the job of FBI Director (and get turned down) the day before he was wrongfully appointed Special Counsel. Hope he doesn’t say that under oath in that we have numerous witnesses to the...

....interview, including the Vice President of the United States!


In short, the President has accused the former special counsel and the former director of the FBI of perjuring himself before Congress, and has roped the VP in as a corroborating witness. Mike Pence must be thrilled.

Takeaways: Now that you have our basic assessment of Wednesday's events, you want some other outlets' opinions? Well, good, because we've got takeaways aplenty. Just about everyone had a list:

The Bottom Line: In the end, Mueller's appearance was most certainly not the silver bullet that many Democrats were hoping for, and it did not move the needle on impeachment in any meaningful way. That's not just our opinion; after Mueller left the Capitol, the Democrats held a closed-door strategy session in which Speaker Nancy Pelosi (D-CA) said that moving forward on impeachment simply cannot happen right now. The 10 legal scholars that Politico consulted are almost uniformly in agreement with her (and with us).

That means that the President is not entirely wrong to claim victory here. As he is no closer to being impeached today than he was yesterday, he won this battle. On the other hand, Robert Mueller went on national TV and said (clumsily) that Trump is very prosecutable once he leaves office. So, even if the battle is won, the war is far from over.

Programming Note: We're going to push the Q&A to tomorrow, in case anyone cares to ask any questions about Wednesday's events, or our sharply-worded coverage thereof.