Everybody, including us, thought that Donald Trump had managed to fully co-opt Washington D.C.'s celebration of the Fourth of July, and to turn it into a full-blown campaign rally (except with tanks and bombers as an added "bonus"). Everything in the lead-up to the event suggested as much, from Trump's promotion of the event, to the RNC handing out VIP tickets to donors, to the military officers who expressed deep concern about the plans they were hearing.

However, Trump's much-ballyhooed address turned out to be pretty standard presidential fare. It was heavy on the militarism and patriotism, even by Fourth of July standards, and tried very hard, and very clumsily, to channel the spirit of John F. Kennedy. For example: "As long as we stay true to our course, as long as we remember our great history, as long as we never, ever stop fighting for a better future, then there will be nothing that America cannot do." In any case, the address was bereft of the other material that everyone expected. No MAGAs, no trumpeting Trump's record, no attacks on Democrats, etc.

How to make sense of this? We'll offer up three theories. The first possibility is that Trump's sense of decorum and his respect for the occasion won out over his self-promoting tendencies. However, given that he was even willing to turn an address to the Boy Scouts into a rally speech, we tend to discount this possibility. The second possibility is that, for all his willingness to stretch the rules to their breaking point, Trump was aware that he was pushing his luck, and decided to dial it back. Given his past disregard for the Hatch Act, we are also disinclined to think this is that answer. That leaves us with the third possibility, namely that Trump loves to zig when everyone else thinks he's going to zag. This seems the most likely explanation.

In any event, this episode of "The Apprentice: White House Edition" is over. We'll undoubtedly learn soon what the subject of the next episode will be. (Z)

Trump Running Out of Census Options

The drama surrounding the citizenship question on the census is starting to come into better focus. It is now certain that the government has begun printing the census forms and that, at the moment, the question is not on them. It's also clear that Donald Trump has not given up, as yet.

Exactly how it happened that the Dept. of Justice announced that the matter was being dropped, only to have the President declare that it most certainly was not being dropped, is still not entirely certain. There have been many other examples of Trump administration folks doing their own thing, and then hoping the President doesn't notice, or that he gets distracted by something else. It may very well have been that; AG Bill Barr could have seen the writing on the wall, and proceeded accordingly, only to get snapped back by the President. More likely, however, is that Justice really thought the fight was over. Maybe Trump told them as much, and then changed his mind, or maybe they interpreted the beginning of the printing process as prima facie evidence that time had run out.

The options available to the administration, at this point, are pretty limited. To move forward with the question, they would either need a favorable ruling from the Supreme Court, or else Trump might try to add it by executive order. The former is far from a sure thing and would take a while (since SCOTUS is not in session right now), the latter would be of such dubious legality as to potentially be impeachable. If Team Trump does somehow get to "yes," by hook or by crook, they would have to add the question as a supplement to the census, which would substantially reduce its effectiveness, both as a tool of data collection, and as a tool of intimidation. The administration says they will announce today what its plans are. (Z)

If Trump Doesn't Hurry, He Could Be Secretary of Defense-less

Former secretary of defense James Mattis stepped down on January 1, and was replaced by acting secretary Patrick Shanahan, followed by acting secretary Mark Esper. However, the Federal Vacancies Reform Act of 1998 decrees that a position may be filled by acting officers for no more than 210 days. So, Esper's nomination to the post must be resolved by July 30. Since the Senate is not in session this week, and has a lengthy to-do list when they get back, it won't be easy.

On one hand, Senate Majority Leader Mitch McConnell (R-KY) & Co. are eager to get someone approved, particularly given the current tensions with Iran. They can, and surely will, expedite the process. A speedy confirmation also reduces the chances that skeletons will be found in Esper's closet, which is good for the President, because his vetting process is slap-dash at best. On the other hand, if something does go wrong in the roughly 10 days that Esper is under the microscope, there will be no time to change course and find another nominee. On the third hand, though, if Esper is formally rejected by the Senate (Shanahan withdrew before he could be considered), it resets the 210-day clock, and would allow Trump to stick with an acting secretary (which he likes) into 2020. In short, no matter what happens, things are likely to work out well for the President, despite an exceedingly amateurish approach to the whole process. (Z)

About a month ago, Rep. Justin Amash (then R-MI) became the first Republican to support impeachment proceedings against Donald Trump. This angered the members of the Freedom Caucus, which Amash helped found, and eventually quit the group. Then, on Thursday, he used the occasion of the nation's birth to publish an op-ed announcing that he is quitting the GOP entirely. He also blasted the two-party system, declaring that it has "evolved into an existential threat to American principles and institutions." As a result, he is now Rep. Justin Amash (I-MI).

This almost certainly means that Amash's career in Congress will end next year. It's quite difficult for independents, even those who are incumbent, to win elections. If he did run again, he would lose sizable numbers of Republican votes because of his opposition to Trump, and also because he will no longer have a (R) next to his name. A centrist might plausibly make up those lost votes from independents and Democrats, but Amash is a very far-right libertarian, and has no chance of doing so.

The Congressman is certainly clever enough that he knows this. That means that there are one of two things going on here. Either he was planning to quit Congress anyhow, and he decided to do it in a blaze of glory, with hopes of taking the folks in Washington down a notch. Alternatively, he's setting himself up to run for president as a Libertarian in 2020. Amash isn't going to win, of course, but he could steal some votes from President Trump. The tone and tenor of the op-ed certainly suggests that a presidential run is where Amash is headed.

Trump, for his part, responded thusly to the news:

Great news for the Republican Party as one of the dumbest & most disloyal men in Congress is “quitting” the Party. No Collusion, No Obstruction! Knew he couldn’t get the nomination to run again in the Great State of Michigan. Already being challenged for his seat. A total loser!


The President is not named in Amash's op-ed, so either he is just taking another shot at someone who he feels insulted him, or else he fears an Amash candidacy and is trying to get out ahead of it. To get a crude sense of whether Amash could become a deciding factor, consider that Trump won Michigan, Pennsylvania and Wisconsin by 10,704, 46,765, and 22,177 votes, respectively. The hacky, last-minute Gary Johnson/Bill Weld Libertarian ticket took 172,136, 146,715, and 106,674 votes in those states, respectively. If Amash runs a real campaign and improves on those numbers by 33%, taking most of his votes from Trump, then it would be enough to flip all three states assuming everything else stays the same. In short, it is at least plausible that Amash could become a real problem for Trump. (Z)

If you've already forgotten the name "Joe Crowley," you are to be forgiven. He's the long-serving New York congressman who slowly drifted out of step with his constituents, and unexpectedly fell victim to a primary challenge from his left, in the form of Rep. Alexandria Ocasio-Cortez (D-NY). There is a school of thought that Sen. Ed Markey (D-MA) could be vulnerable in the exact same way in 2020.

The 72-year-old Markey has been in the Senate only since 2013, but he was first elected to Congress in 1976, meaning he's now in his fifth decade in Washington. That, and his largely centrist positions, already mark him as "old guard" and "yesterday's news" for many progressives. On top of that, however, he's also got a particularly poor polling profile, with an underwhelming 38% approval rating, and only 44% of Democrats saying they are likely to vote for him. Also interesting is that 14% of Massachusetts Democrats say they have never heard of him. That's pretty high for someone who has been in politics for more than 40 years.

Because Massachusetts has a sizable Republican minority, as well as a lot of working-class centrist Democrats, Markey isn't quite as far out of step with his constituency as Crowley was. However, if he draws a top-flight primary challenger, he would be in serious danger. Boston mayor Marty Walsh (D) has been mentioned as a possibility, and would give Markey all he could handle. Or how about Rep. Joe Kennedy III (D-MA)? Bet Massachusetts Democrats all know who he is. (Z)

We thought we had previewed every plausible candidate for the Democratic nomination before we moved on to phase two, and started revisiting candidates. We thought wrong, however. So, here we go with the surprise late entry to the field. 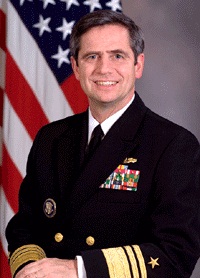