A Demographics vs. Economics Election?

John is a married 57-year-old factory worker who lives in a small town in Alabama. He has a high school diploma and loves to bowl and hunt. Mariana is a 28-year-old single Latina who lives in downtown Seattle. She has a college degree and works as a manager for Microsoft. She loves to ski and travel. Can you predict how they are going to vote in November? Anyone who is enough of a political junkie to be following a site like this one probably thinks that is a no brainer. And it is.

Demographics play a huge role in elections, probably more than any other factor. President Obama--and Democrats generally--are having a terrible time with older white working class voters and there is little they can do to change that quickly. But the demographics of the states do change over time as the composition of their populations change. The map below, which shows the results of the 1976 election in which Jimmy Carter beat Gerald Ford, doesn't look a lot like the current one. 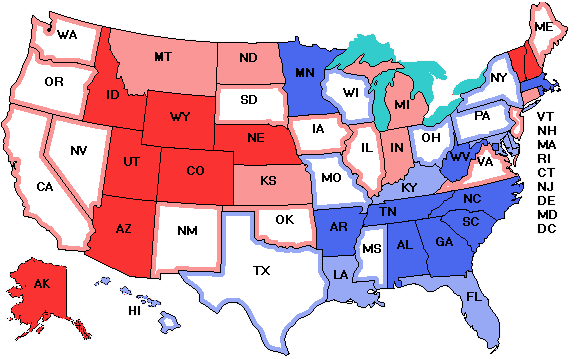 Admittedly, Carter was a Southerner, which helped him in the South, but lest one forget, the South was once solidly Democratic (because the great grandsons of the slave owners hadn't forgotten it was a Republican President who freed the slaves).

But Carter's origins hardly explain why the Republican candidate swept all the Great Plains, Mountain, and Pacific Coast states, not to mention Illinois and four of the six New England states. Part of the explanation has to do with demographics. The electorate was 89% white in 1976. It was 74% white in 2008 and dropping a few points each year. Modern whites don't care who freed the slaves and vote overwhelmingly Republican. Minorities vote strongly Democratic. As the demographic balance slowly changes, it is going to have a greater and greater effect on elections.

The poor economy is surely going to cost Obama a few percentage points this year, but an article in the NY Times today suggests that at least some of this effect is going to countered by demographic changes in the electorate since 2008. Of course, a lot depends on the mood, enthusiasm, and turnout among nonwhite voters.

The financial turmoil in Europe is getting worse and a meltdown there would affect financial markets worldwide, wreaking havoc in the U.S. as well. President Obama is keenly aware of the situation and doing what he can to help matters, but his leverage is limited. The core of the problem is that while most of Europe has a single currency, controlled by the European Central Bank in Frankfurt, each country has its own fiscal and financial policies, and they differ sharply from country to country. Opinions about what to do about the crisis are as varied as in the U.S., with some economists and politicians calling for more austerity to reduce the ballooning budget deficits almost everywhere, while others are saying such action will only make things worse. The latter group are calling for increases in government spending to create jobs now. The deficit can be dealt with when the economy is in better shape, they say.

Obama Falls Below 270 Electoral Votes for the First Time

For the first time this year, Obama has fallen below the magic 270 electoral vote line due to a single poll by Rasmussen in Missouri at a time when he is also behind in Michigan, North Carolina, and Ohio and tied in Iowa and Florida. If you haven't been tracking the history of the electoral vote this election, click on the Electoral vote graphs item on the menu to the left of the map. It gives a better perspective than the daily snapshots that the map gives.